Virtual Exhibits contains links to online exhibits created or sponsored by Archives and Special Collections with materials from the holdings. The exhibits are frequently created alongside physical exhibits presented in The John A. Schweitzer Gallery, located at the entrance to the public reading room.

John Davis Barnett donated over 40,000 books and thousands of pamphlets, the largest single gift ever received by a Canadian library, to the University of Western Ontario in August 1918 and became Western's first librarian. The Barnett Legacy Collection includes digitized versions of books from Barnett's original donation.

100 Years of Nursing at Western

2020 marks the 100th anniversary of nursing education at Western University, with a Certificate in Public Health Nursing first being offered in 1920, and the Bachelor of Science in Nursing offered shortly after in 1924.  This virtual exhibit follows the founding of nursing education at Western in the early 20th century until the present day and includes both historical and contemporary materials from Western University's own Archives & Special Collections and the Arthur Labatt Family School of Nursing.

Eldon House, located at 481 Ridout Street North, was built in 1834 for John Harris, Treasurer of the London District, and occupied by his family - his wife Amelia and their eight children; two more children were born in 1836 and 1839. It was first named Eldon Terrace, shortly thereafter changed to Eldon House.

The History of Medicine Collection virtual exhibit is intended to provide an overview of the archival collection housed at Western Archives. By examining the correspondence, certificates, and pictures, we are able to gain significant insight into the life and times of medical students and doctors at The University of Western Ontario in the late nineteenth and early twentieth centuries. 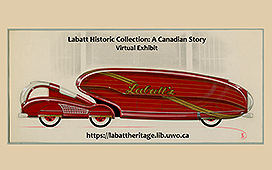 In 1847, John Kinder Labatt went into partnership with Samuel Eccles and a brewery was born. The Labatt Heritage Collection: A Canadian Story exhibit provides an overview of the company’s history, from 1847-2017. The exhibit was created in partnership with the Labatt Brewing Company to celebrate their 170th anniversary.

The former London Asylum for the Insane (LAI) opened in 1870, and has transformed over the years in response to changing approaches to mental health care. In 1869 the provincial legislature appropriated $100,000 to build the London Asylum for the Insane, and 300 acres of land were purchased at $67 an acre. Older asylums at Malden and Orillia closed and were replaced by the new facility in London. The LAI was ready for occupation within 18 months of the site's purchase and its first patients arrived from Malden and Orillia in November 1871.

Stars of the Town

Dubbed "Stars of the Town" by their creator, the late Rev. LeRoy (Roy) H. Massecar (1918-2003), the collection of 85 silent black and white 8mm films representing 88 Ontario locations depict small town life in the province between 1947 and 1949.